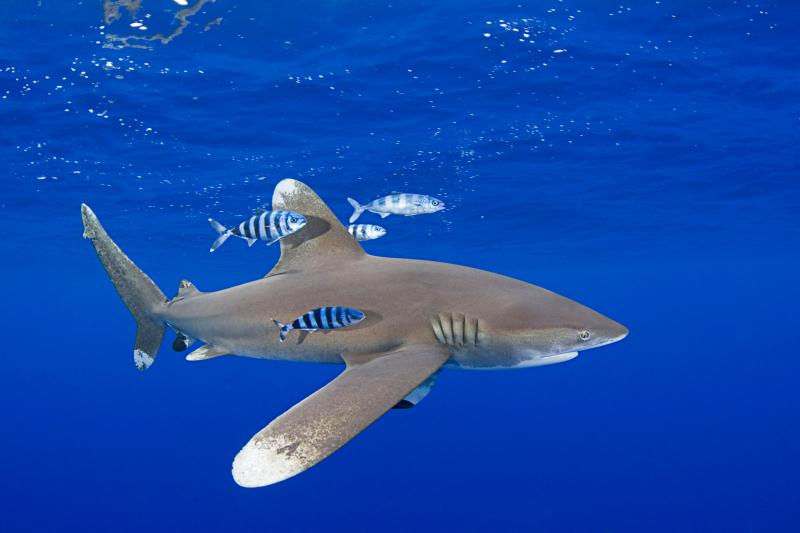 Suva, Fiji – The Government of Fiji has been an active advocate of the conservation and management of sharks and rays.

In 2016, Fiji also made history by becoming the first Pacific Island country to propose global trade restrictions on sharks and rays to ensure their survival and in doing so silky sharks, all three species of thresher sharks and nine species of mobula rays were listed on Appendix II of CITES after a series of landslide votes at the 17th Conference of Parties to the Convention on International Trade in Endangered Species of Wild Fauna and Flora in Johannesburg, South Africa. Fiji had also successfully lobbied for the inclusion of reef mantas (Manta alfredi and Manta birostris) and all species of mobula rays under the appendices of the CMS in 2014.

Fiji is also a member of the Western and Central Pacific Fisheries Commission (WCPFC), the international treaty organization, which manages fisheries of highly migratory fish stocks, mainly tuna, in the Western and Central Pacific Ocean. In December 2019, WCPFC member states adopted an updated and binding Conservation and Management Measure (CMM) for Sharks which came into effect on 1st November 2020. The measure, although allowing fisheries to implement alternatives, includes a catch and retention ban on oceanic whitetip and silky sharks as well as a “fins-naturally-attached” policy, which means vessels must retain and land the entire shark carcass with all fins intact. It is considered the most effective way to eliminate the wasteful practice of shark finning which involves cutting fins of sharks and discarding the carcass at sea.

At the national level sharks are protected under Fiji’s Endangered and Protected Species Act, which regulates and controls the trade of any species listed under CITES as well as indigenous species not administered by CITES. The Offshore Fisheries Management Act 2012 and its regulations regulate the use of fishing gear used to catch fish (including sharks) as well as restrictions relating to the catch, sell and possession among other things of the shark species listed under Appendix I & II of CITES. In 2019, a shark fin import and export ban was implemented.

So why are countries such as Fiji taking steps to better protect shark species?

Sharks evolved around 400 million years ago, and have outlived dinosaurs. The 1,200+ species play many key roles in marine ecosystems. They do not simply dwell in the ocean; they shape it – making them indispensable to ocean health and the well-being of millions of people across the globe. Beyond their intrinsic value, oceanic sharks and rays are important for food, human livelihoods, tourism and their ecological roles.

Global shark populations are rapidly declining despite the increased observations and reports of sharks in Fiji waters recently. A recent study revealed that global populations of open-ocean sharks and rays have declined by 71% since the 1970s due to an 18-fold increase in relative fishing pressure. Half of all the 31 species of oceanic sharks and rays are now either critically endangered or endangered according to the IUCN Red List.

Insufficient species-specific data continues to thwart global efforts to manage sharks and rays. Much of the data required for effective fisheries management depends on reports provided by trained observers onboard fishing vessels. However, the minimum 5 % observer coverage of vessels required by many tuna regional fisheries management organizations (t-RFMOs) remains far lower than what is required to provide representative fisheries data of the whole fishery. This hinders science-based management of sharks and rays, as well as other commercial fisheries such as tuna, and effectively prevents any meaningful monitoring and compliance.

Shark by-catch is also a major issue faced by the global longline fishery and the Fiji offshore tuna fishery is working diligently to address the issue with partners and stakeholders including WWF. By-catch is the unintentional catch of non-targeted species. Sharks continue to make up a large percentage of annual by-catch in the Western and Central Pacific.

The decline in shark interactions over these years could possibly be linked to the implementation of relevant shark management measures including the ban on the use of trace wires and other restricted fishing gear as outlined in the Fiji Offshore Fisheries Management Act 2012 along with its regulations on the use of circle hooks; deep setting; prohibited use of shark lines; and improved observer coverage over the years. Reduced interactions could also be an early signal of overexploitation, meaning that the interactions are reducing because there are perhaps less oceanic sharks in Fiji’s waters.

However, perhaps because of Fiji’s unparalleled shark conservation efforts, an increased number of interactions with sharks in the offshore sector have been reported through first-hand accounts and reports from fishing captains and crew onboard Fiji flagged fishing longliners. An article in the Fiji Times on 23rd January, 2021, “Sharks Trouble Longline Fleet”, reported that this is resulting in the loss of fish bait and gear (hooks and lines) and indicates that shark numbers are actually increasing. There were suggestions from the longline sector that because of the large numbers of sharks observed by crew on fishing vessels, the ban on shark finning should be lifted for a few years to control population numbers. According to the media article, the species of sharks that posed a problem for fishing vessels in Fiji waters were the Blue shark (Prionace glauca), Oceanic Whitetip shark (Carcharhinus longimanus), Mako sharks and Thresher sharks (Alopias).

Vilisoni Tarabe, WWF-Pacific’s Sustainable Fisheries and Seafood Programme Fisheries Policy Officer, highlighted that despite the perception of greater numbers of sharks and suggestions to lift the ban on shark finning, there is a need to retain and improve current measures across the region.

“Data from the Fiji country reports submitted by Fiji Ministry of Fisheries to the WCPFC over the past three years that have been verified by certified national observers show that Fiji flagged fishing vessels are interacting less with sharks. The species of sharks mentioned are also listed on the IUCN Red List of Threatened Species, where the Blue shark is listed as Near Threatened; the Oceanic Whitetip is listed as Critically Endangered; the Mako sharks are listed as Endangered; the Pelagic Thresher shark is listed as Endangered while the Common and Bigeye Thresher shark species are listed as Vulnerable to Extinction. Oceanic Whitetip shark population in the Western and Central Pacific Ocean has declined by 95%.”

“It is important that current measures such as the shark fin import and export ban for example, are left in place and/or strengthened and that steps are taken by all WCPFC members to ensure compliance with the WCPFC Shark Management Measure (CMM 2019-04) which came into force on 1st November 2020, to help protect all shark species. We also need to continue working with our industry partners to improve awareness of these iconic species and to lead the way in terms of applying best practice by-catch mitigation,” Tarabe highlighted.

Globally, WWF is calling on all contracting parties (CPCs) of the four major tuna RFMOs (regional fisheries management organizations) to implement a set of urgently needed measures – including to increase observer coverage on all industrial fishing vessels to 100 per cent by 2030 and to introduce recovery plans for all critically endangered and endangered oceanic sharks and rays by 2026 – in order to prevent extinctions of heavily depleted populations of pelagic sharks and rays and to support their recovery.

“Shark depredation is also an issue that can cause a range of negative impacts both ecological and economical. It is where a shark partially or completely consumes hooked fish and bait from fishing gear before it is retrieved by the fishing vessel. This mostly occurs on commercial and recreational fisheries around the world and, despite its negative impacts on the fisheries, it is still an understudied topic compared to other fisheries issues. By-catch mitigation information from on-going research and the testing of shark deterrent approaches can help in mitigating shark depredation,” Tarabe added.

WWF continues to provide support towards Fiji’s shark conservation measures to ensure that they are met. This includes assisting the Fiji Government and aligned stakeholders in the development of Fiji’s National Plan of Action for Sharks implementing the WCPFC Shark Management Measure (CMM 2019-04).

Assistance has included providing by-catch guidelines titled ‘By-catch Best Handling Practices: A Guideline for Skippers and Crew on Longline Fishing Vessels in Fiji’ and ‘Best Practice for By-catch Mitigation in Fiji’s Tuna Longline Fishery: For Vessel Owners & Operators’ to strengthen by-catch mitigation efforts within Fiji’s offshore fisheries sector by ensuring skippers and crew have a visual aid onboard for ease of reference to ensure by-catch of sharks and other species are appropriately released.

By-catch mitigation toolkits and awareness materials are also being supplied to Fiji flagged offshore fishing longliners to improve safer handling of by-catch including sharks onboard these vessels and to further strengthen Fiji’s by-catch mitigation efforts.

The supply of the by-catch mitigation toolkits is being supported by the By-catch and Integrated Ecosystem Management (BIEM) Initiative implemented by the Secretariat of the Pacific Regional Environment Programme (SPREP) under the Pacific-European Union Marine Partnership (PEUMP) programme funded by the European Union and the Government of Sweden, and by the New Zealand government through the Developing Sustainable and Responsible Tuna Longline Fisheries in Fiji project that is a project partnership between the Fiji Fishing Industry Association, Ministry of Fisheries Fiji, Fiji Maritime Academy and WWF.

A number of key activities will also be implemented through the BIEM Initiative. These include awareness raising, educating and building the capacity of tuna longline skippers and their crew on by-catch best practice and policy through a port-based extension programme at port; supporting the uptake of proven by-catch mitigation techniques and tools including providing the necessary equipment and reference materials to facilitate this; and provision of scholarships to improve understanding of by-catch mitigation practices of deckhand fishers in Fiji’s longline fishery through the Fiji Maritime Academy’s Fishing Deckhand Course which includes a module on by-catch mitigation.

Jamie Davies, BIEM Initiative Manager at SPREP added his support for the initiative.

“SPREP is committed to supporting Pacific countries deliver their international, regional and national commitments to reduce by-catch of all threatened, endangered and protected species. We are extremely pleased to have funding through the PEUMP programme to work directly with ministries, industry and NGOs to provide equipment and training to skippers and crew that will help them minimise interactions and ultimately death of species that play such an important role in oceanic ecosystems as well as Pacific cultures.”

SPREP is leading Key Result Area 5 of the PEUMP programme, the BIEM Initiative, to support the governments of Fiji, Papua New Guinea, Solomon Islands, Tonga and Vanuatu in the sustainable management of coastal and marine biodiversity.

The BIEM Initiative consists of eight integrated areas consisting of marine spatial planning; integrated ‘ridge to reef’ ecosystem strategies and coastal zone management planning; development and integration of climate change adaptation strategies into coastal community plans; assessment of by-catch of endangered species and extinction risk; development and implementation of by-catch mitigation strategies; capacity development through research grants to citizens of Pacific island countries; support for community monitoring and protection of endangered species; and capacity development of Non-Detrimental Findings process for CITES partners. Human rights and gender equality will be core considerations in the development and implementation of each of these components.