Turtle tagging and release success at Salelesi in Samoa 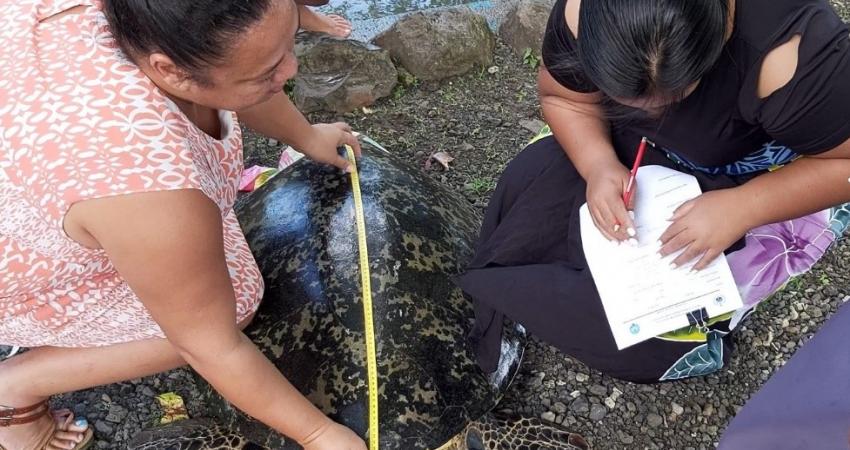 A green sea turtle, which had been caught and entangled in a local fisher’s net, was successfully tagged and released safely back into the ocean on 6 October 2021.

The turtle, which was caught two days earlier by a fisherman from the village of Salelesi about 16 kilometres east of Apia on Samoa’s Upolu Island, was kept in the village pool while the fisher sought assistance from the Ministry of Natural Resources and Environment (MNRE) of Samoa and the Secretariat of the Pacific Regional Environment Programme (SPREP).

According to SPREP’s Turtle Database and Conservation Officer, Mr Unity Roebeck, the green turtle (Chelonia mydas) was an adult male and had not been tagged prior to being accidentally caught. Green turtles are not known to breed in Samoa but commonly forage here.

Through a collaborative effort between the local villagers of Salelesi, the MNRE Department of Environment and Conservation, and SPREP, the turtle was measured, tagged and released two days later.

Mr Roebeck said: “We would like to thank Salelesi village for reaching out to MNRE regarding the turtle, and also for keeping it safe in the village pool whilst they awaited assistance.”

“It is very important that the proper authorities are alerted when situations like these arise, and so we commend the villagers who assisted us in tagging and releasing the turtle back into sea.”

Turtle tagging increases our understanding of important locations in their life history such as where they come ashore to breed and where they forage, when tagged turtles are sighted again. The data collected during the tagging is recorded in the Turtle Research and Monitoring Database System (TREDS), which is managed and maintained by SPREP as part of its turtle conservation programme for Pacific Island countries and territories.

SPREP’s TREDS database and officer have been supported by the By-catch and Integrated Ecosystems Management (BIEM) Initiative, a key result area of the Pacific-European Union Marine Partnership (PEUMP) programme funded by the European Union and the Government of Sweden and with additional funding from the Government of France through Fonds Pacifique.

The EURO 45 million PEUMP programme promotes sustainable management and sound ocean governance for food security and economic growth, while addressing climate change resilience and conservation of marine biodiversity. The BIEM Initiative is implemented by SPREP with one of its objectives focused on assessing by-catch of sea turtles and evaluating their extinction risk.

For more information on what you can do when you come across a stranded or bycaught turtle, please contact Mr Unity Roebeck at [email protected] or contact your local environment protection agency.