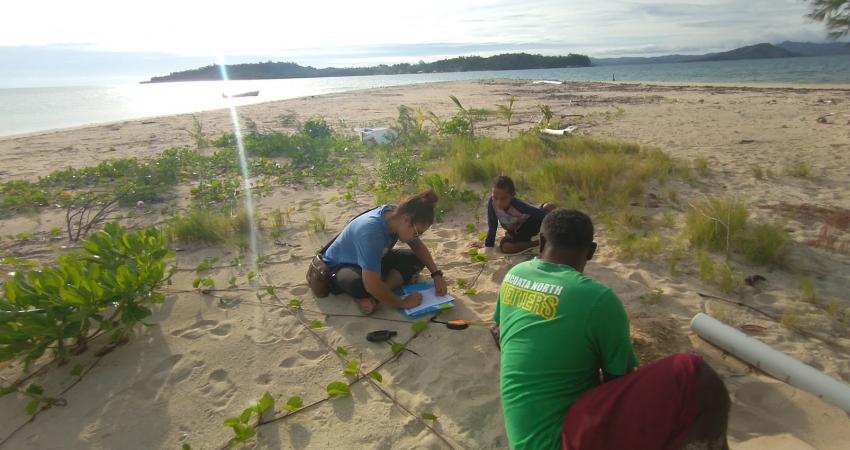 As with many other reptiles, the sex of a marine turtle embryo is determined by the temperature of the nest in which the eggs incubate. Warmer sand temperatures (>29°C) produce mostly female hatchlings, whilst cooler temperatures produce predominately males (<29°C). Scientists are concerned that due to human induced climate change, there will be an increase in female hatchlings, known as feminisation, leading to a decline in overall population due to the lack of male production. Identifying marine turtle nesting areas that may be feminising and require sand cooling intervention has become a priority for researchers in the low latitudes of Asia-Pacific.

A study is now under way in Fiji to determine how climate change will impact the nesting sea turtle populations of Fiji. Fourteen temperature data loggers and a weather station have been deployed on Katawaqa Island off Kavewa village in the far north of Vanua Levu in Fiji’s Macuata Province. The island is one of Fiji’s key nesting sites for the critically endangered hawksbill turtle (Eretmochelys imbricata). Nest sand temperature, along with other weather variables, such as rain, is being measured to help determine how populations of marine turtles are being impacted by rising sand temperatures associated with human induced climate change.

The study is being led by the World Wide Fund for Nature Pacific office (WWF-Pacific) with the support of the Secretariat of the Pacific Regional Environment Programme (SPREP) By-catch and Integrated Ecosystem Management (BIEM) Initiative. The BIEM Initiative is Key Result Area 5 of the Pacific-European Union Marine Partnership (PEUMP) programme, which is funded by the European Union and the Government of Sweden. This study is part of the greater Turtle Cooling Project led by WWF-Australia in collaboration with the University of Queensland and many other partners to identify at-risk feminising nesting beaches across Asia-Pacific, determine how many breeding males are required to maintain a stable population, and to provide on ground sand cooling solutions, such as irrigation, to increase male production.  The results will also inform the marine turtle extinction risk assessments in the Pacific initiated by SPREP and being undertaken by Dr Nicholas Pilcher at the Marine Research Foundation.

“This is a significant first for turtle research in Fiji and across the region,” says Mr Laitia Tamata, Fisheries Project Officer at WWF-Pacific. “We have not used long term temperature data logging instruments in previous studies, instead relied on observations and immediate hands-on measurements to predict climate change impacts to turtle populations.”

The temperature loggers are small devices buried in the sand at different depths and will continue to record daily temperatures over a 12-month period, which includes one full nesting season. The weather station will record wind speed, temperature and pressure and rainfall at the site. It has been installed in the Kavewa community and the data will be downloaded at 2-monthly intervals and cross-checked with information from the closest meteorological station.

Katawaqa Island is one of three locally important nesting sites of the hawksbill turtle in northern Fiji. It is important as the island has recorded more than ten hawksbill turtle nests in the past, owing in part to the characteristics of the island. Katawaqa is a rather idyllic, uninhabited atoll with shade-giving trees in the centre, encircled by a raised and sloping white sandy beach. To date, we do not know the sand temperature profile of the beach and whether feminisation is an issue. There may be sufficient shade for most nesting areas of the island. However, a recent beach erosion study by WWF-Pacific on three nesting islands, Yadua, Kia and Katawaqa, found that the beaches have already retreated by at least 10 metres over a four-year period. Representative of the other significant hawksbill nesting beaches in Fiji, this project will be crucial to understand if Fiji is at-risk of a feminising population and where best to put its efforts to support future sand cooling effort and interventions.

The community of Kavewa Island has been involved in turtle conservation and research with WWF-Pacific since the early 2000s. One of the challenges for turtle conservation research is that the nesting season coincides with Fiji’s cyclone season (November to April). Two tropical cyclones – TC Ana and TC Yasa – resulted in delays in installing the instruments earlier in the 2020 nesting season.

“The village of Kavewa was severely affected by the cyclones and needed assistance with rebuilding,” explains Mr Jamie Davies, Manager of the SPREP BIEM Initiative.

“Unfortunately, when we thought the people of Kavewa were ready to be involved in deploying the data loggers, COVID related travel restrictions then came into place, meaning that the WWF-Pacific technical team based in Suva, a COVID contained zone, could not visit Kavewa to deploy the loggers.”

The BIEM Initiative Fiji country coordinator, Kelera Macedru, who happens to be based in Vanua Levu, was able to step in – a request that required very little prompting! Ms Macedru embraced her unexpected task with enthusiasm and, with online guidance and training provided by Turtle Cooling partner and PhD candidate, Ms Melissa Staines, she familiarised herself with the equipment and installation process. 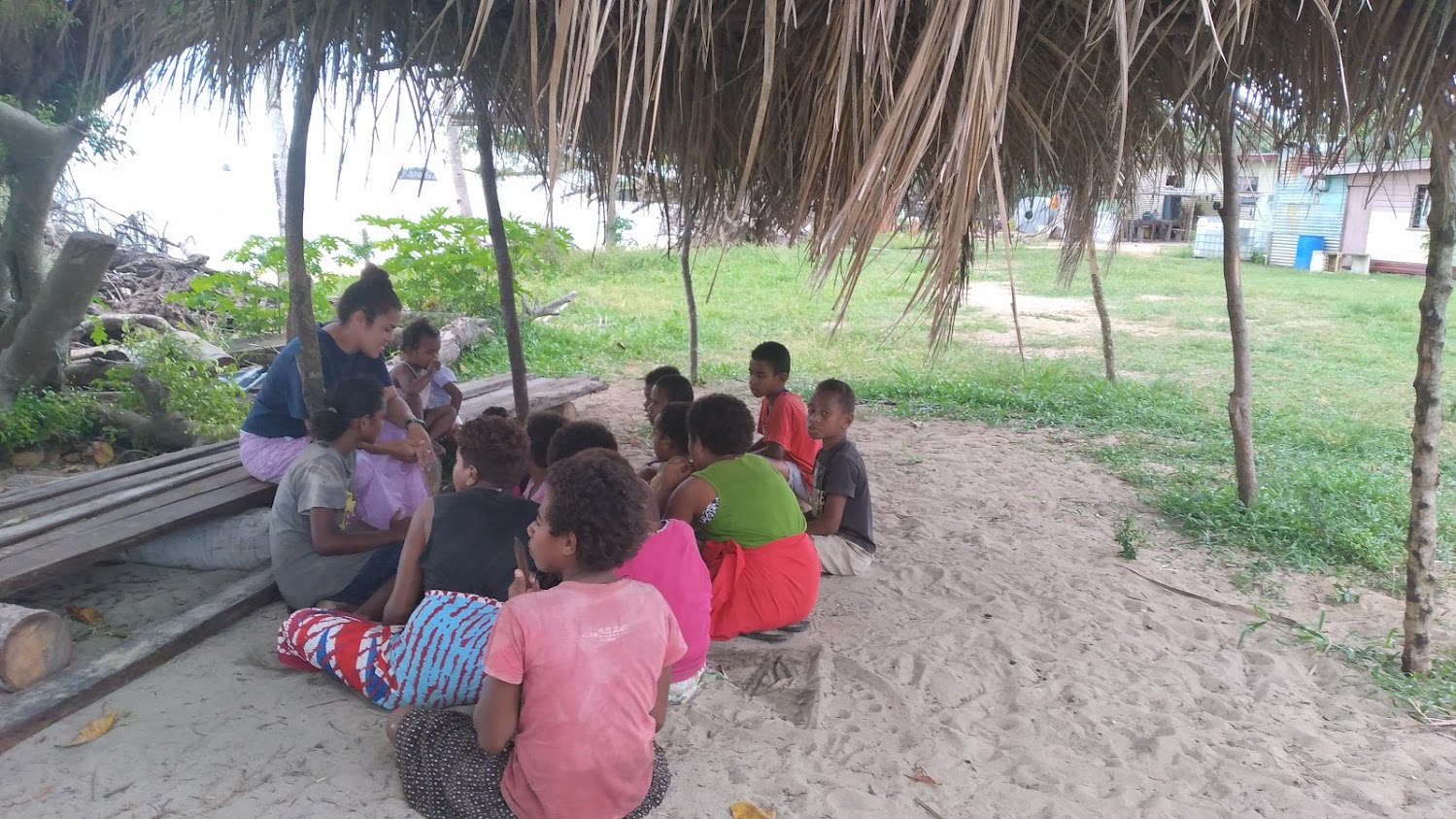 Ms Macedru enlisted the support of Ms Talei Silibaravi, who hails from Kavewa, in the deployment of the temperature loggers and the weather station. Ms Silibaravi works for a local non-government organisation, Community Centred Conservation (C3) in Labasa on Vanua Levu, targeting education of school children on waste management and environmental protection. The installation of the mobile weather station and the temperature loggers was achieved over a two-day period from 23-24 June 2021, following the strict requirements of ensuring location of the loggers using a GPS location device and setting up control sites.

When asked to describe her experience of the activity, Ms Macedru said “I am delighted to be a part of this activity and to enable the installation of this important research equipment.”

“It was a valuable opportunity for me to meet the Kavewa community and to get an appreciation of their island.”

Although somewhat disappointed she did not happen upon an errant turtle on the sandy shores, or during the short boat ride from Kavewa to Katawaqa, she explains that the nesting season is yet to commence and that turtles generally only come onto land at night.

She also appreciated the knowledge of Mr Emosi Silibaravi , the Dau ni Vonu or turtle monitor and protector.

“We were almost fully reliant on Emosi’s understanding of turtles and their behaviour,” she says. “Once on Katawaqa Island, we needed his guidance as we set about installing the temperature loggers.”

Mr Silibaravi was once a traditional turtle hunter but has turned his skills to protecting what he sees as the heritage of his people. 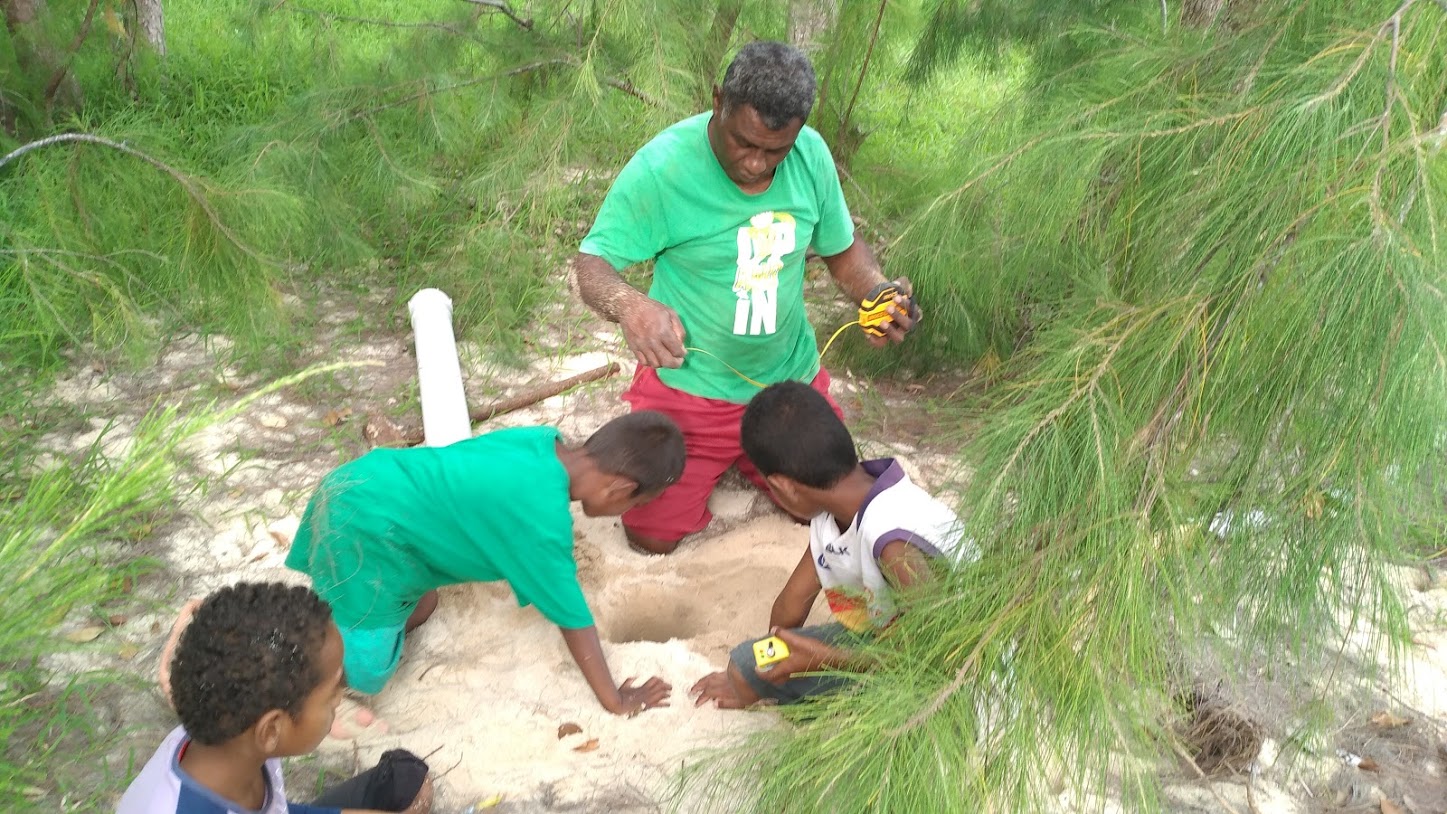 Jamie Davies, BIEM Initiative manager, says “Despite the hitches caused by travel restrictions due to COVID, we are glad to have found a workable solution that will allow the planned turtle assessment work to progress.

“The urgency of climate change remains a constant even during this pandemic, and we do our best to progress the all-important conservation and species management work in collaboration with our implementing partners and local communities,” he said.