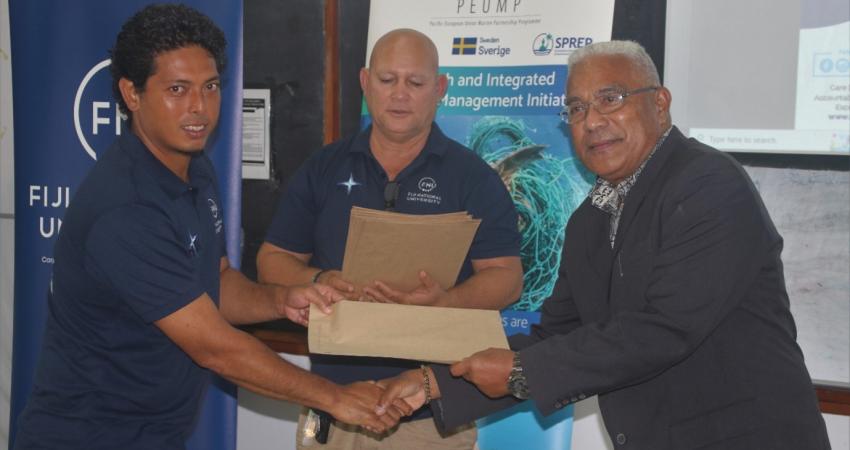 Graduates of the month-long course received certification to serve on board a fishing vessel as a deck hand. Through the project “Improving uptake of by-catch mitigation measures for Species of Special Interest in the Pacific Longline fleet through a port-based extension programme”, the BIEM Initiative provided scholarships that covered the course tuition and a weekly stipend for transportation and meal allowances for 51 selected crew members.

The Deck Hand Programme is a one-month intense theory and hands-on training course on basic sea safety, nautical and by-catch knowledge. The by-catch component of the course is an attempt to streamline sustainable fishing practices and applications for these students when they are absorbed back into the fisheries sector’s workforce.

Aaron Freddy Fotofiri who hails from Abemama, Kiribati and Juju, Rotuma is one of the BIEM-funded students who graduated from the programme in August 2022. He has worked on fishing vessels since 2003 and is the sole breadwinner for his family.

“I started in 2003 with Fiji Fish then joined a few Fiji flagged Chinese owned fishing companies and vessels such as Arianna Pte. Ltd. and Sea Fresh Ltd. Their vessels would go out to sea for three to four months and I have been to the Solomon Islands and Vanuatu as well. I have been with Sea Fresh Ltd. on their vessels for almost 13 years.”

For Aaron, this course has provided a lot of new knowledge in sea safety as well as on the issue of by-catch management.

“Prior to joining the Programme my knowledge of by-catch is that we can’t catch sharks and turtles.”

Through the programme, Aaron is now well versed with the importance of protecting by-catch species, the different by-catch species that longliners interact with at sea; and identifying the various shark species and terms used to identify the various by-catch mitigation toolkits used on board.

The course has also  given him new confidence and he is already exploring other opportunities in the industry.

“For us that didn’t finish school, this was an opportunity to get a certificate in the industry. I was thinking of applying to be an Observer and I have queried with the Ministry of Fisheries.”